Leading up to this race I’d been enjoying some good form. I’d placed in the top ten in my previous four races and managed some 10 mile TT PBs. However, 2 nights prior I’d raced a TT and afterwards had been bitten by some monster mosquitos all over my arms and legs. I felt like a pile of poop the next day. I sacked off the Bexley hillclimb I’d planned to go to that evening, opting to go to bed super early instead. I still wasn’t feeling right the next morning, almost opted to drive to work, but thought I’d ride just to see if racing seemed on the cards. I felt fuzzy on the ride in, did a days IT consulting, and still felt crap when 5:30 came. I’d have gone straight home and rested up if this race had been at the start of the season, but seeing as it was the last one of the series I thought I’d see how I felt on the ride to the Cyclopark. I took it easy on the way, but still felt crap and wasn’t sure if I’d be able to race. Throwing caution to the wind, I entered anyway. I sent the Directeur Sportive a message saying I could well be home early as I might get dropped on the first lap. Had an emergency coffee, ate a banana and hoped for the best.

Although I didn’t have any Gemini team mates for this one, Gary from my “other/old” club Bigfoot was racing again. Typical, I joined Gemini so I’d have people to race with, but the regular crit racers are all 2nd cats now! For instance Tony from Gemini was also racing, but in the 1-2 race. This season I’ve come to know a few of the regular Cyclopark racers, and there were a some friendly faces racing. Then there were also a couple of guys who I would much rather finish in front of than behind.. Gary and I had a chat and planned to wait until 30 minutes into the race, then try to get away out of the hairpin and 2up to the end..

The cards were set, 37 starters, should be a good race, if I didn’t blow up.

The start of the race was pretty relaxed which I was grateful for. A few early attacks were quickly reeled in. After 10 minutes I started feeling a lot better, and decided to take to the front at a few key corners in order to string out the bunch and make everyone work a bit.

After a couple of laps I realised that I was doing too much on the front again, so sat up and let the bunch pass me. Just as this happened the shouts to let the 2nd cats come through on the right started. Two riders from Richardsons-Trek went past us as if they were out on a Sunday cafe ride. A junior from the 3-4s almost took them out at the hairpin, and then tried to get a tow from them. Kids huh?! I was still sitting in half a lap later when a decent sized group of about 6-8 riders, including Gary, broke off the front. Just as they did the main 2nd cat peloton caught us. Chaos ensued. This looked bad. As Gary had made the split I’d have nobody to share the effort of a chase with. We were forced to slow down to let the 2nds through just as the break was getting away. Nothing I could do other than wait. Once the 2nds were through we chased, a couple of 3-4s cheekily got tows from the back of the 2nds peloton but were shouted at to stop. Going up the finish straight we did manage to catch the 3-4 break who had also been forced to sit up to let the 2nds through.

30 minutes was now approaching and I found myself on the front going up the finish straight. Coming up to the hairpin I put in a dig so that I was on the front going into it, took the faster wider line and then put in another big dig on the climb out of it. I looked back and had managed to gap the field. Gary was putting an effort in to join me. I throttled back a touch to let Gary catch me up, he went past me and towed me down the back straight at full gas. I took the front again approaching the left hander and took it as fast as I could. I checked my shoulder and the bunch had managed to catch us. They weren’t letting us go that easily, but that acceleration must’ve hurt everyone.

So that was that, and coming up to the start finish line the 3 laps to go board was out. I tried to recover a bit, but the attacks started coming. I jumped on the wheel of a couple of breaks on the penultimate lap, which warmed my legs up. Coming out of the hairpin I found myself in 2nd wheel, the guy on the front suddenly decided he didn’t want to be there and flicked his elbow. He obviosuly didn’t like it when I said “Sorry mate, you can stay there”, he jabbed his breaks, almost causing a pile up. If I get my 40 points I won’t miss riding with him next season. A couple of guys then attacked, I was still recovering and had to let them go. Then one more went and the chase started. I jumped into somewhere about tenth wheel and followed.

We managed to catch one of the three guys up the road at the start of the last lap, but two still had a gap of about 50 meters. I was wondering if we’d manage to catch them. Thankfully the guys on the front were keen enough to chase. Going down the back straight I tried to control my breathing and get as much oxygen in my blood as possible. Going into the last bend I was about 5th wheel and feeling decent. The two riders who were out the front were now only 20 meters or so ahead, we were catching them at a rate of knots, and hadn’t even started our sprint yet. I decided not to wait this time, kicked up the steepest part of the straight, then flicked up two gears and pulled the trigger as soon as the road flattened out a bit. I went just at the right time, passing all the riders in the front of the bunch. I took the front just as we were catching the two breakaway riders at the point where the track bends slightly to the left. They were taking the racing line cutting accross the circuit to the left. Fair enough, but they’d got in the path of a peloton in full sprint, eeek! Heart in mouth I shouted “HOLD YOUR LINE!!!”. I just about managed to miss riding into the back of them, and they didn’t change direction again so I managed to go around them to the right. I continued to drift to the right of the circuit, and took a quick glance over my left shoulder, half expecting to see a group coming past me. But nothing! I emptied the tank all the way to the line and took the win, with Gary taking second place just behind me. Then collapsed in a heap on the grass.

Glad I decided to race!

Sprinting on the hoods 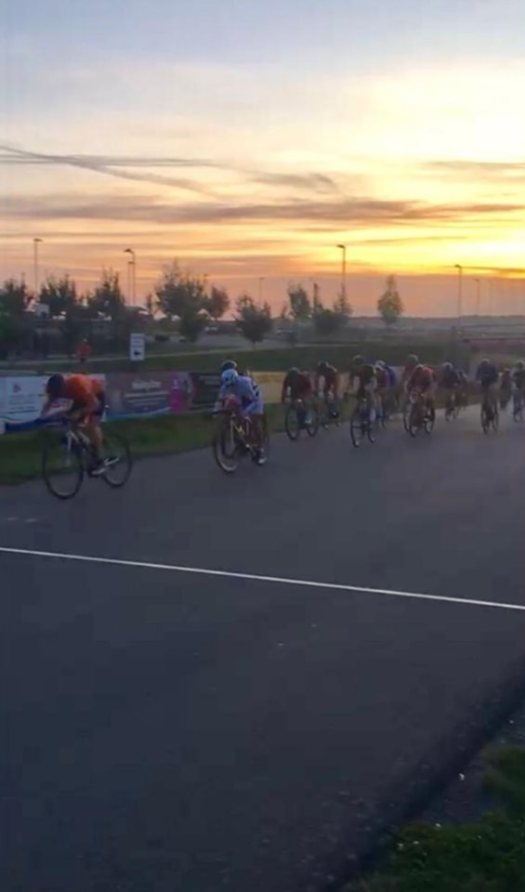